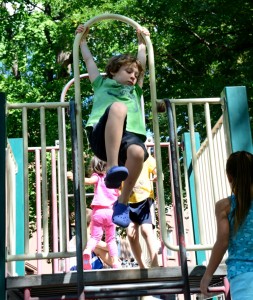 Building playgrounds is a core initiative for us. Playgrounds give children a safe place to be physically active while building their minds and spirits through imaginative play  and interaction with other children. Playgrounds also provide a much needed gathering place to bring children, families and communities together.

“Play is not frivolous: it enhances brain structure and function and promotes executive function…Play is not just about having fun but about taking risks, experimenting, and testing boundaries.. Countries that offer more recess to young children see greater academic success among the children as they mature.” – The Power of Play, American Academy of Pediatrics, 2018.

But, the world desperately lacks the playgrounds it needs.

We partner with schools, cities, and other organizations to fund and build new playgrounds. Every year we identify two communities in the tri-state NY-NJ-CT area, and often fund one playground outside the US. We raise the funds to make these playgrounds a reality and donate them to the recipient community which then owns and maintains the playground. An Alexandra’s Playground typically culminates in a community build, bringing families and neighbors together.

We have funded more than thirty playgrounds since our founding in 2009 and supported children in several play centered programs. While the majority have been in the tri-state NY-NJ-CT area and across the US,  area, six are in Haiti, and two are in Afghanistan.

In 2013, with the generous support of a major donor, Susan Weil, we were able to extend our impact to thousands of children in Haiti. We have completed six new playgrounds for communities that would otherwise have no access to safe playgrounds.

Upcoming Playground Builds
If you would like your organization to be considered for a playground build, or you would like to volunteer to build with us, please email lori@alexandrasplayground.org

Some of Our Playground Locations