VISIT OUR NEWS PAGE to see our most recent playgrounds and more. 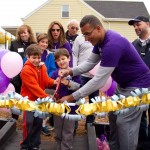 On October 24th 2015, Alexandra’s Playground came together with more than 200 volunteers from the Paterson community to build a much needed playground for PS#29 in Paterson, NJ.  This is the first playground for this school and its surrounding neighborhood. In addition to benefiting the 309 Kindergarten through Grade 4 students during school hours, the playground remains open to the community outside of school hours.

See photos from the build day. 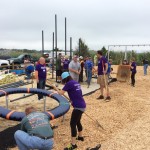 On Saturday June 20th, we built a new playground at Butler Beach in Bayville, NJ to replace one at the same site decimated in 2012 by Super storm Sandy. We worked with our partner Kompan, a provider of state-of-the-art playground equipment, to design and install this playground. It includes three swings, a pirate ship themed central unit with climbing equipment and slides, a super nova and spinner bowl.

Watch the video of build day. Read the news articles from the Asbury Park Press and The Patch. 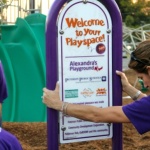 On October 25th, 2014, more than 300 volunteers from Alexandra’s Playground and the community of Paterson, NJ came out to roll up their sleeves and build a new playground for school #27 in Paterson, NJ. We had a beautiful day for building benches, assembling playground equipment, mixing concrete and raking mulch. It was hard work and a lot of fun!

This playground is the first for this school since being built in the 1950s. The playground will be open to the surrounding community after school hours and on weekends.

Thank you to KaBOOM! for all the coordination. And a huge thank you to Liam, Audrey, Griffin and Isla Patterson, the New Jersey Community Development Corporation and all of our amazing donors for helping to make this playground come to life! 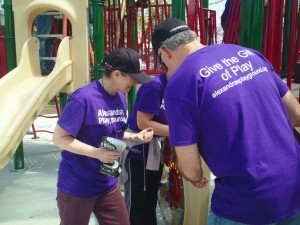 On May 10th, 2014 we built a new playground for Freeport, NY. This community continues to rebuild after the devastation it suffered in Superstorm Sandy. The playground will serve Freeport’s 40,000 residents, including 1700 children who are under age 6. The playground will provide the young children of Freeport a safe place to play for many years to come.

Read the Newsday articles from our Press page. See more photos in our gallery.

In October, 2012 we funded a state of the art playground built by Kompan for the new Jesse Allen Park in Newark, NJ. The development of this impressive park was  led by the Trust for Public Land. Jesse Allen Park is Newark’s second-largest city-owned park and serves more than 18,000 people living within a half-mile radius. It  is adjacent to Louise A. Spencer Elementary School and will well serve its students daily. 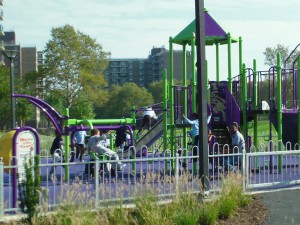 The playground we built together with the community of Spring Creek and KaBOOM! in NOvember, 2012 serves thousands of children and their families at Spring Creek Towers, the 2nd largest federally funded housing development in the US, located in East New York, Brooklyn, NY.

It was a great day of team work, sharing with friends and family and forging of new friendships.